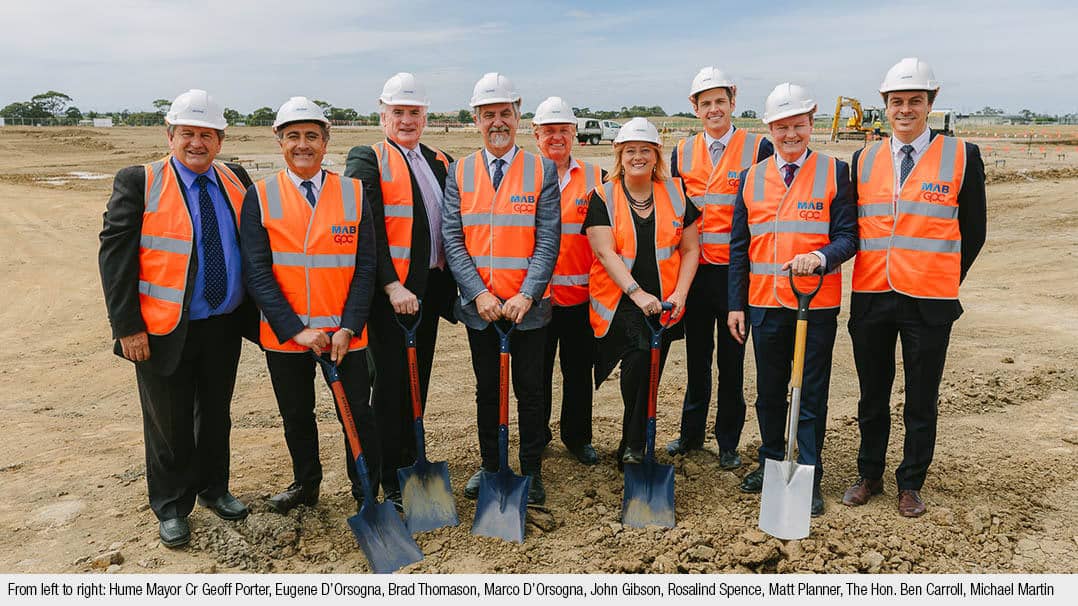 Up to 240 jobs set for Melbourne’s north: MAB and GPC welcomes D’Orsogna to Merrifield Business Park

Up to 240 new jobs are set to be created in Melbourne’s burgeoning north, with MAB Corporation and Gibson Property Corporation (GPC), the developers of Merrifield Business Park in Mickleham, sealing a $41 million deal with leading small goods supplier, D’Orsogna. It was one of the biggest industrial deals in Melbourne for 2017.

MAB and GPC are developing a 10,858m2 manufacturing facility on three hectares of land at Merrifield Business Park for the WA based company to service its growing eastern seaboard business and drive greater efficiencies in their distribution network. With the City of Hume’s population and jobs market growing at around double the national average], the small goods supplier will benefit from a labour force of approximately 405,000 people within a 30 minute drive of Mickleham.

MAB Corporation Managing Director, Andrew Buxton, said that the deal signals the continuous growth of the manufacturing industry in the City of Hume.
“We are thrilled to bring a food manufacturer of this calibre to Melbourne’s north – this is a boon for both the state and Merrifield, with an estimated 240 new local jobs to be created at the factory,” said Mr Buxton.

“Already we’ve seen big names such as Dulux and D’Orsogna establish a presence in Melbourne’s north, no doubt because if its connectivity to the east coast of Australia, with direct access to the Hume Freeway and proximity to Melbourne Airport, as well as access to a solid local employment base.”

Minister for Industry and Employment, Ben Carroll, added: “The D’Orsogna expansion is creating jobs, boosting the food and fibre sector and further cements Victoria as the home of manufacturing in Australia.”

The new facility will far exceed the standards for export approval and the south east Asian market will become a focus for the company in the medium term.
D’Orsogna Managing Director, Brad Thomason, said the Merrifield site was appealing not just because of the location, but also because of the ability to create a bespoke factory tailored to the company’s needs.

“We’re thrilled to be calling Merrifield our eastern states home very soon, and proud to be partnering with MAB and GPC. There are many synergies between our businesses – we are a proud Australian, family-owned businesses with a focus on quality, growth and local investment.

“We have ambitious expansion plans for the business over the next few years. The scale and flexibility of Merrifield provides us with an opportunity where we can essentially double our manufacturing footprint,” said Mr Thomason.

He added: “What’s more, Merrifield is partnering with leading Melbourne industrial construction company Qanstruct to design and deliver a highly specialised manufacturing facility, just for us.”

Mr Buxton added: “This is a complete turnkey solution for D’Orsogna. We have jointly designed a facility that will be best-in-class for the food manufacturing industry, focusing on efficient and sustainable practices.”

Construction has commenced and D’Orsogna plan to open for business in late 2018.