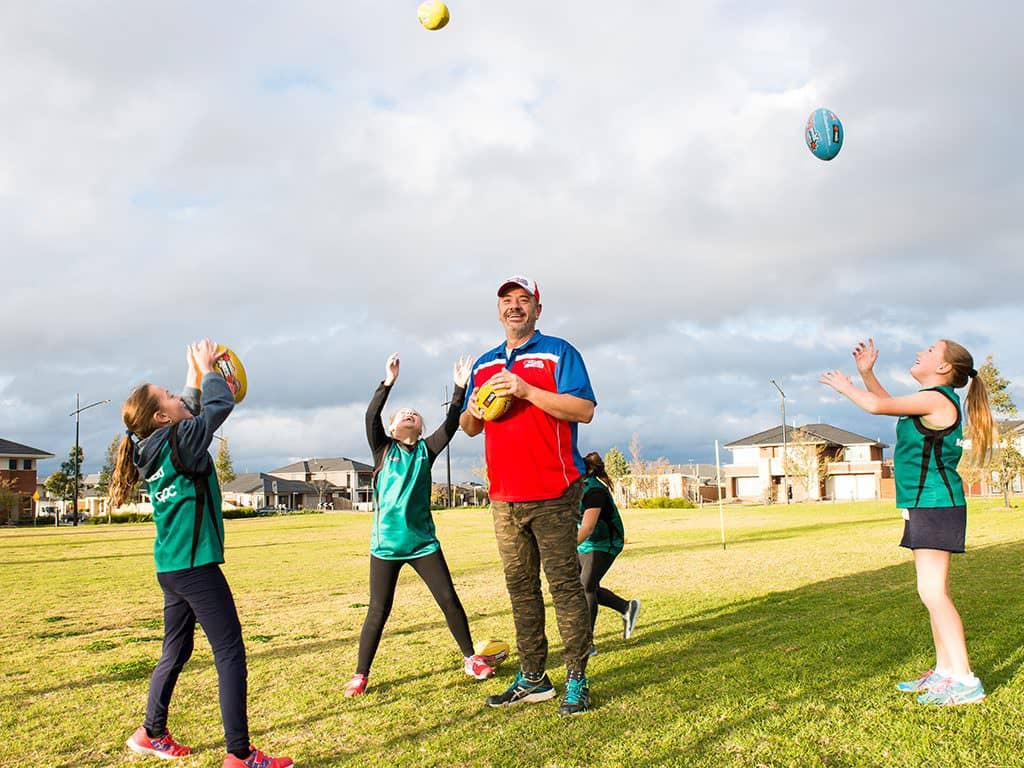 Meet Glenn – the resident behind some of Merrifield’s community programs and initiatives.

Tell us a little bit about yourself.
Kat and I have three children, Izabelle(11), Madisyn(9) and Zac(4). Like most people we know, we are both working full time and doing our best to raise a young family. Fortunately, we have a great network of family and friends nearby to help support us. We try to be involved in the community as much as we can, given our already busy lifestyles.

What do you and your family love most about living in Merrifield?
First, we fell in love with the developers’ vision of Merrifield; a community designed with the community in mind was very appealing. Living in Merrifield since February 2017, we now really feel a part of that community. There are so many things happening here it is amazing what has developed in such a short time. We love the parks, the market, and all the new friends we have come to know.

What is Auskick Merrifield and how did it all begin?
Auskick Merrifield is an AFL endorsed program to introduce children between the ages of 5 and 12 to AFL. It provides an opportunity for kids explore the world of AFL, develop football skills and find a completely new group of friends. The program, originally introduced to Merrifield by MAB three years ago and in the first year AFL Victoria were running the weekly sessions. Our two girls joined and really enjoyed the activities and getting to know other kids from Merrifield. Steven Strong (another parent from Auskick and Merrifield resident) and I were terrible watchers so we started to become involved in the weekly sessions. Firstly, we were ball boys, then goal umpires, and then activity helpers and our involvement continued to grow.
After that first year, MAB and Auskick approached Steve and I to see if we wanted to take on the co-ordinator role for Auskick Merrifield. At the time, we were both a little hesitant as we thought we were not really qualified to supervise twenty kids for an hour every Saturday morning in the cold of winter. After assurances that we would have plenty of support, we decided that we should volunteer together to keep it going for the kids and give something back to the community.

What inspired you to become the coordinator of Auskick Merrifield?
I come from a family have always volunteered within the communities that we lived in, with the belief that it helps to create a stronger community. Yes, sometimes it is hard to get up early on a Saturday morning after a hard week at work, however, there is something really fulfilling about being a part of something bigger. The idea of kids being more active is important and what better way to set the right example for my children then by getting out there with them every Saturday, come rail, hail or shine. Having played sport as a kid, I learnt many life lessons through coaches and people involved around sporting clubs, the helped to define who I am today. This was one opportunity to pay it forward to the next generation.

How successful has this program been? Have you received community feedback?
It is hard to measure whether we have been successful in the program, as defining a true measure is difficult. What I do know is that we have had seven participants from the program advance to play local junior football and more than ten kids have come back for their third consecutive year. We have expanded to 35 participants in 2019, a number that will continue to grow. We have several parents regularly volunteering their time each week helping with the activities, which is something that their kids really enjoy.
Parents who have recently moved into Merrifield tell us that the organisation of our centre is better than what they were involved with in previously. Just last week, a Grandmother, who unexpectedly become involved in one of our handball drills as Grandpa had disappeared, sought me out afterwards to tell me how much she appreciated the way that the kids were engaged. Other local residents trying Auskick for the first time this year are already regular helpers each week with activities and admin tasks as well as supporting fundraising initiatives.

Tell us about Merrifield Panthers Sporting Association – Merrifield’s first incorporated community group.
Merrifield Panthers Sporting Association is a non-profit incorporation with a committee of five board members all of which are volunteers. The sporting association was really born from our involvement in Auskick. Steven and my family had become good friends and we began talking about other sports our kids could become involved in. We quickly realised that local options were limited, so we decided to try to start something ourselves. We really did not know what we were getting ourselves into, but six months later here we are. We have the Auskick program; we have three teams entered into the Craigieburn Junior Basketball competition playing as the Merrifield Panthers, with plans to continue to extend our involvement in other local sports. We are always open to ideas and initiatives from local residents and invite nominations to join the association.

Why do you feel it is important for the community to contribute to creating local programs and activities for people to connect?
Being involved initially with Auskick and now the Panthers, our network of friends in Merrifield continues to expand. It is nice to actually know other parents who you walk by in the street every day; I think it helps to create a stronger healthier community. Being involved in Merrifield is important to me and fortunately, at this moment I have the opportunity to do so. Living In such a new and growing area, I believe we all have the opportunity to help to mould and nurture our own future.

Are there any other local programs you would like to implement in the future here at Merrifield?
Regardless of how much or how little time you have to offer becoming involved as a volunteer is great for the community. Whether it is helping a neighbour, donating to local fundraising initiatives, helping to keep our streets tidy and safe or simply introducing yourself to the person who walks their dog past your house every day at 5:45pm. We can all benefit from a strong, vibrant, resident led community, its an amazing opportunity to be a part of where you live. The opportunities are endless as our population continues to grow, rugby league, soccer, cricket, netball, little aths just to name some sports. Walking groups, mothers groups, mens sheds, scouts, guides, pet owners, cycling groups, community gardens, cultural groups, arts groups, environmental groups, these are all things that will develop in Merrifield, why not take the lead.
For further information about the Merrifield Panthers Sporting Association Inc, contact merrifieldpanthers@gmail.com.

If you have not heard from us after this time, please feel free to email the Merrifield Design Review Committee at mldrc@mab.com.au or contact the Merrifield Sales Office on 03 9684 8120 for further information.